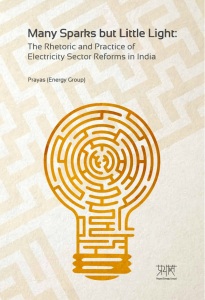 Earlier this year, I happened to pick a book, ‘Many Sparks but Little Light: The Rhetoric and Practice of Electricity Sector Reforms in India’ published by Prayas (Energy Group). The book clearly stated the objective was to examine the electricity sector reforms in India so far and make recommendations in the hope that future acts in the sector have an impact. The sections in the book are split between generation, distribution, renewable energy, hydro, coal, natural gas and alike. There is a recurring theme to the book and I have picked out a few pointers in them.

The need for generation privatisation and unbundling is well acknowledged but the results reveal a net negative effect of the process in the sector. Reading this part of the story makes one wonder if all the previous reforms were successful we would have never needed a UDAY (Ujwal DISCOM Assurance Yojana).

Generation privatisation was expected to increase the capacity addition and bring down the tariffs but it never happened. The book captures the series of litigation that have come about in this period. In sharp contrast, net thermal power capacity addition has been low while renewable energy adoption particularly wind has seen a rapid rise post the privatisation of generation. The capacity addition by the private sector in renewable energy has been heartening although authors’ argue that competitive bidding instead of a preferential tariff should have been the norm. I agree to this argument considering the recent development in the wind energy sector post the 1GW reverse bidding tender.

The tariff setting has been on the back-foot right from the beginning. The authors argue that instead of having a competitive tariff bid for thermal power early on during privatisation, they were offered preferential tariffs on a cost plus basis which has been a failure. In contrast we now have aggressive competitive bidding for renewable energy projects which are bringing the net tariff down but the benefits are not passed down to the consumer because the tariff structure is tilted towards fixed cost recovery rather than being flexible in line with the marginal costs.

As rightly pointed in the chapters, the failed reforms have created a surplus capacity in books, resulting in stranded assets, low utilisation of power plants thereby reducing the net effect of the resources. The irony of having 300GW plus of installed capacity when the peak demand is around half of it and still facing grid reliability issues is the net result of these reforms.

On the retail side of tariffs, it is quite evident that there is major cross subsidising in the sector with the fixed cost recovery being very poor across DISCOMs. Unless the fixed costs and energy costs are completely recovered independently as envisaged in the National Tariff Policy (2016) it will be impossible to reap the benefits of low carbon transition where the energy costs are next to zero.  It looks to be seen how close the DISCOMs adhere to the tariff increase commitments made as part of the commitment to UDAY.

The authors’ have a valid reason in being critical about open access, they portray the financial impact of exodus of the cross subsidising industrial and commercial consumers to open access across DISCOMs (Distribution Companies).  However, I feel it goes straight against their argument on competition or lack of in it in the sector particularly in generation post privatisation. It is good to have open access as it pushes the DISCOMs to be innovative and offer better incentives to consumers, an example to cite would be the recent proposal from BESCOM (Bangalore Electricity Supply Company) to reduce energy charges and increase the fixed charges to HT clients. Although the regulator didn’t accept the proposal it has set the other DISCOMs and the regulator thinking radically.

In the end, the lack of reforms or successful reforms in transforming the state of the DISCOM sums up the state of sector. UDAY, which seems to be a revolutionary step isn’t first one; the Financial Restructuring Plan (FRP-2012) offered similar services although UDAY aims to make the DISCOMs more accountable with state participation. It is quite easy to assume the proposed reforms by the current Central govt. are radical steps; the authors set things straight by pointing out a slew of failed previous reforms introduced by previous governments. Overall, the book is an interesting read for anyone looking for a comprehensive summary of the electricity sector post 1990s which vindicates the credibility of the research group behind the book.

More details about the book can be found here.